This post was originally published on May 8, 2017
The latest update to this post was made 4 years ago. 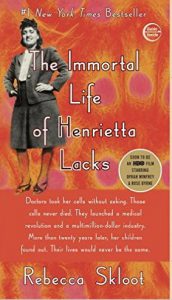 The Immortal Life of Henrietta Lacks by Rebecca Skloot is an eye-opening book for everyone.  Any biology major knows how important cells are to research.  HeLa Cells are an important part in any biological research.  Harvested in 1951 at Johns Hopkins Hospital in Maryland, the cell grew from a tissue sample take from a young woman with cervical cancer.  Henrietta’s cells were and still are invaluable to medical research.  Rebecca Skloot dives deep into the journey of the Lacks family over the cells.

The identity of the donor cells were kept secret.  Everyone wanted to know the donor of these important cells but they were always thrown off with fake names.  Henrietta Lacks real name leaked out to the world in 1970.  Rebecca became interested in who was this person that contributed to such important discoveries, like the development of the polio vaccine.  Rebecca states she was obsessed with Henrietta Lacks.

Family
The daughter of Henrietta Lacks, Deborah, learned about her mother from Rebecca.  They had no idea about the use of Henrietta’s cells for research.  Through a cross contamination in the lab, scientists wanted to take DNA samples from the Lacks family.  HeLa cells can float on dust particles, hands and other items to contaminate other cultures.  Scientists needed to identify what parts of the cultures contained Lacks DNA.

Henrietta’s husband, David, received a call from a postdoc who wanted to gather DNA samples from as many relatives as possible.  David had less than a third grade education and did not understand what the postdoc was talking about.  All he understood was that his wife was still alive.  He didn’t understand that it was some of her cells that were still alive.  Deborah became interested in learning more.  Nobody really understood what the scientists were talking about but they wanted to know.

The fact that Henrietta’s cells were harvested came as a surprise.  Nobody asked for permission.  People began making money from her cells, yet the Lacks family received no money for Henrietta’s cells.  Many research laboratory and hospitals had been selling and buying HeLa Cells since Henrietta’s death.  The family lived in poverty and finally sought money for the harvest of Henrietta’s cells.

Now
Sixty years later, the National Institute of Health announced that the genome data will only be accessible to people who apply and are granted permission to see the data.  There will also be two representatives from the Lacks family that will serve on the NIH group to decide who sees the genome data.  Looking at all the contributions to medicine, this is not ethically enough.

Rebecca Skloot’s book about Henrietta stayed on the New York Times best-seller list for two years.  This book is a great tribute to Henrietta and her family.  It acknowledges what she gave for research, even if she was unaware of it at the time.  HBO will be showing The Immortal Life Of Henrietta Lacks starring Oprah Winfrey in May 2017 (May 9th).