This post was originally published on April 10, 2017
The latest update to this post was made 4 years ago. 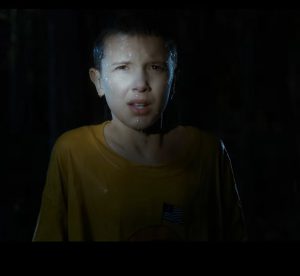 Stranger Things is gearing up for season 2.  The new season will debut on October 31, 2017.   This Netflix hit is taking everyone by storm!  Fandom is eagerly waiting for the start.  Netflix has season 1 online so go catch up if you are not in the fandom.

The main characters are tweens.  This chilling sci-fi thriller has become a popular cult hit.  There really isn’t anything special about the actors.  They are good, but not outstanding.  The supporting actors fall in the same category.  The show is watchable and good.  What makes this show so notable?

The show is set in 1983.  Anything dealing with the 80’s is insanely popular!  The show set designers have all things 80’s on the set and have done a great job of creating a time warp for viewers…   This is one of the draws of the show.

The actors do a great job, I wonder if they get off set and laugh at the lack of technology and wonder how people survived?  From interviews, the cast really enjoys their script and the time era their show is set in.

Actors
The star of the show is Millie Bobby Brow.  She began acting in 2013.  After taking classes in 2011, a talent coach identified Millie as a natural.  The family moved to Los Angeles to pursue her career.  That was a big leap that paid off.  I see her career taking off and we all hope she does not end like many other child actors.   Not many young actors remained in acting after reaching their 20’s.  Many young actors also are plagued with drinking or drug issues.  Let’s hope Millie has a strong family to keep her grounded.

Most impressive is Gaten Matarazzo.  Impressive is not that he overcame his disability to act, but impressive is his Broadway resume!  Newcomer, Caleb McLaughlin, is brilliant on the screen.  His humor shines through the script.  Playing along side these actors are seasoned actors, Noah Schnapp and Finn Wolfhard.  Each brings an extensive resume to the cast.

Season 2 is getting ready to roll out.  There will be season 2 watching parties and interviews galore.  Everyone loves the 80’s.  The key to a successful movie or book is to set it in the era of the 80’s.  Who can resist the 80’s?  I will be watching season 2 of Stranger Things…  Will you?

Netflix – I Am Not Okay With This Review

Estimated Reading Time: 3 Minutes This post was originally published on March 15, 2020The latest update to this post was made 3 years ago. Netflix – I Am Not Okay With This Review Netflix has several original movies and series [Read More…]