This post was originally published on February 19, 2019
The latest update to this post was made 4 years ago. 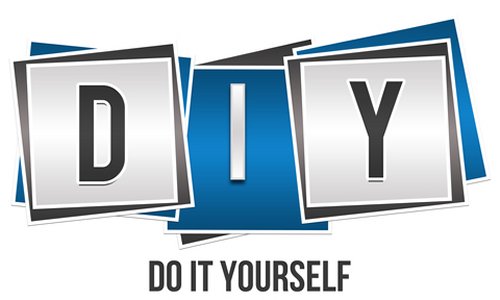 Do It Yourself (DIY), is more popular today than ever before. Thousands of Etsy stores sell DIY items everyday and many of the owners make enough to supplement their income. For some, it is the only source of income.

I know of a family of four who stayed in a Disney World Park hotel, for two weeks and visited Disney’s Magic Kingdom, Epcot, Disney’s Hollywood Studios and Disney’s Animal Kingdom all on what she made from her Etsy store.

What is her store, you may ask? She takes plain colored shirts for children and adults and screen prints logo images and quotes on them. Also, she makes custom shirts or onesies for birthdays. And now, she has added koozies with quotes and stuffed animals with custom names on them as well. All in all I would say she has a successful business that allows her to stay at home with her two children.

Wanting to give my own Etsy store a try, I brainstormed what I could do and came up with the idea of bath and shower melts. There are hundreds of Etsy stores that sell the same thing, but at varied prices. My idea was to go cheaper than the competition and toss around the word organic. People want things organic and little do they realize, most everything is organic! 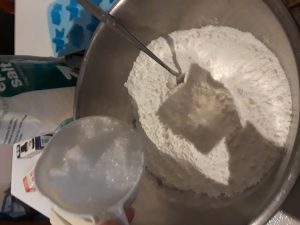 I needed to perfect my product before starting to sell. Researching recipes I found a few to try. This one is a common bath bomb/melt. I knew I did not want much citric acid because it is hard on your skin. Citric acid is found in lemons or you can buy it as a powder and this is what provides the fizz when you place the bath bomb/melt in water.

I mixed up my batch using baking soda, Epson salt, organic orange oil and lemon juice. I used a metal bowl and silicon spatula then my hands to mix. The mixture held a shape when I pressed it together, so I knew it was ready for the mold.

Using my hands taking small amounts out and placing them in the silicon mold and then using a plastic egg half I pressed some in and tapped it out on foil to dry. When the silicon mold was packed it did not transfer to the foil in the mold shape so I packed it again and put it in the freezer to set. 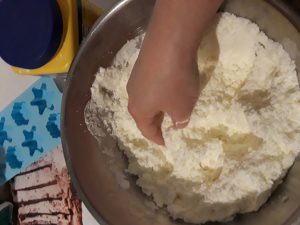 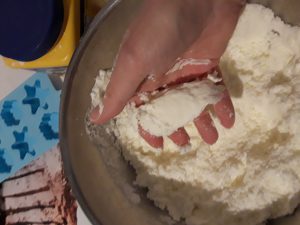 As the mixture sat out it looked dry and I added more lemon juice… these bombs were darker yellow and held shape better. The product dried overnight and the next day I picked them up to package them in Baggies to hand out to friends for testing and feedback. 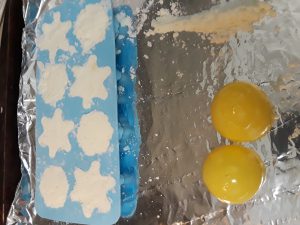 The first batch had some that were too dry and crumbly and others were better. While I was disappointed, I realized it was my first batch. The feedback I received was that people wanted more fizz when they placed it in the water and the smell was very strong. Keeping the product organic will be only in title if I add powder citric acid so people can have that fizz. I will have to think on that one… 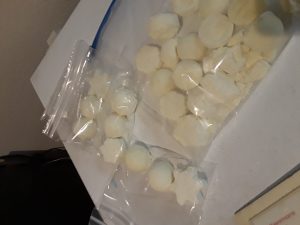 The second batch I used cornstarch with little baking soda and lavender oil. They were put in silicon molds only and placed in the freezer. After an hour in the freezer to set, I transferred them to foil for drying. These looked great and held the shape well until an hour later when they started crumbling at the slightest touch. 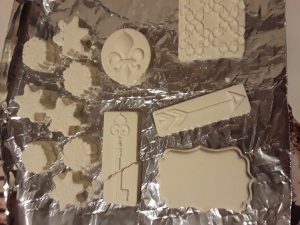 Darker color as they dry. 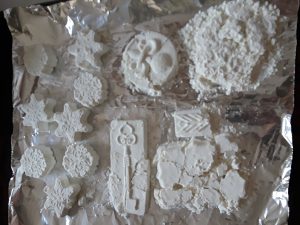 These were scooped up and put in a glass container for my family’s use only. My Etsy store will be on hold for a while until I find a recipe that works. Starting an Etsy store can be expensive in trial and error or the product. The old saying that you need to spend money to make money is holding true!

Estimated Reading Time: 4 Minutes This post was originally published on November 15, 2016The latest update to this post was made 5 years ago. Kenmore Elite Front Loading Dryer Repair You are on page 1/2. Wife – “I think the [Read More…]

Estimated Reading Time: 8 Minutes This post was originally published on November 15, 2016The latest update to this post was made 5 years ago. DIY Saltwater Mixing Station You are on page 1/3. Part of owning a saltwater aquarium is [Read More…]