This post was originally published on February 13, 2017
The latest update to this post was made 4 years ago. 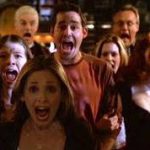 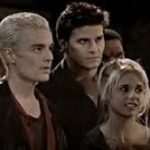 Buffy the Vampire Slayer is an icon of pop culture.  They showcased up and coming music, mostly by female artists and created a language all it’s own.  Buffy language as it has become known as.  Joss Whedon and his writers created ways for Buffy and her Scoobies to talk that were part slang, valley girl and new age.  Buffy language is alive and well even today.  You may use some of this language without even knowing!

Ann Rice Routine is a vampire with a tortured soul and Bat Signal is slayer code for distress signal.  Most references have pop culture already in them.  Buffy always has a witty comeback when fighting or talking to her friends.  Joss and his writers kept up with popular slang and made some up of their own.  They combined popular slang and pop culture to create Buffy’s language.

One popular phrase has been Five By Five.  I have heard kids use this term and when asked what it means, many cannot tell me.  They listen to the situation it is used in and make their own interpretations.  The term means feeling no pain.  One important thing is to know what terms mean before using them!

These terms made the show funny and interesting.
The complete list can be found on the BuffyWorld website.  Half the fun is to try and decipher what the meaning is with some of the terms.  The talented Joss and his writers studied the youth of the times and created a believable character in Buffy and her friends.