This post was originally published on November 17, 2016
The latest update to this post was made 5 years ago. 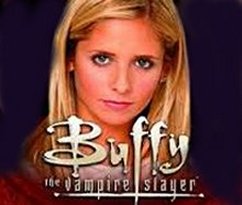 Girl power!  Joss Whedon cornered the market in 1997 by introducing a strong female main character in the television series Buffy The Vampire Slayer (BTVS). The young talented cast was an easy watch each week. The series lasted until 2003 and gathered many new followers each year.

Buffy The Vampire Slayer has even more followers today in 2016.  Many young people who were too young to watch the show while it was on are finding a following with the show.  They are usually the first ones to buy tickets at the comic con shows where the BTVS actors appear. They will even buy the expensive BTVS items on eBay!  So why all the interest?

Buffy is the powerful girl everyone wants to be.  She is strong and in charge.  She also has love interests and struggles that most females can identify with. Every part of her character touches someone in some way and makes the audience identify with her. Her problems seem real, with the exception of the vampires. But the vampires can stand for all the mean and nasty people you deal with in your own daily life.

Portland University even has a college class about Buffy The Vampire Slayer. The television series was not only on TV, but it also had books, comics and cartoons based on the story line. Joss had a gold mine. Academics wanted some of that gold too. Buffy is heavy on allegory and cultural references. Literature classes want to analyze it to pieces just like the fans!

There are many articles, blogs, clubs and chats that do just that. They all talk and dissect the series. There are many podcasts to choose from. There is even a podcast called Buffy Between The Lines, http://www.buffybetweenthelines.com/ , which is a fan audio drama that takes place between the Whedon episodes. The podcast ran through the entire series and is worth a listen.

This is going to be a series I will write about. This was just an introduction and in the next article we will discuss the main character further. Until next time, I ask you to take in an episode of Buffy The Vampire Slayer.

Spike From Buffy The Vampire Slayer

Estimated Reading Time: 4 Minutes This post was originally published on November 26, 2016The latest update to this post was made 5 years ago. Spike From Buffy The Vampire Slayer You are on page 1/2. Spike is a vampire in [Read More…]