This post was originally published on January 17, 2018
The latest update to this post was made 4 years ago. 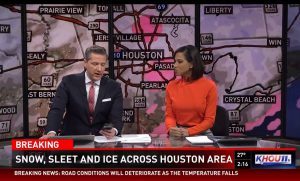 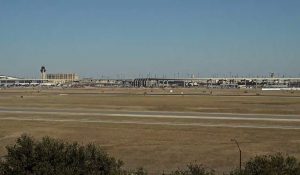 Take this bout of winter storms that started January 15 with a Winter Weather Advisory for the Dallas-Fort Worth (DFW) area.  They were predicting the entire area from DFW to Galveston to be frozen.  The above image is from the DFW Airport streaming camera and as you can see, it is clear.  Here is the problem in a forecast such as this; when you tell a Texan it is going to be cold, panic sets in.  The search for bread, milk, eggs and pet food is frantic, even if you have a stocked food pantry.  Some schools and businesses start to close and if your town is lucky enough to have a sanding truck, they are out on the roads spreading their mix on the bridges.

January 15 brought rain and dropping temperatures that the rain soon turned to sleet and snow although some stuck on the ground, it quickly melted due to the warm ground conditions.  Some schools in the DFW area changed their closing status to late openings when potential hazardous freezing weather did not stay in the area.  No, this freezing weather skipped the DFW area leaving behind freezing temperatures to endure and slammed into all Texas areas south of Dallas.

Austin, San Antonio and Houston are under Winter Storm Warning with school and business closings.  Major highways are closing under freezing conditions making driving extremely hazardous.  Ice, sleet and some snow are accumulating on bridges, overpasses and side streets.  This makes it difficult to get anywhere fast or at all.  In the Houston area, the wintery mix was projected to hit by noon, but by 9:00 am sleet started to drop from the sky and freeze to the roads.   The people lucky enough to be at work that were sent home had to make their way slowly home and others were met with closed roads and had to find alternate routes.   The toll roads even opened up for free passage to help people get home.

Power outages started to occur North of Houston.  Like I said, Texans do not handle cold weather very well, but it is only because it does not happen often; maybe once a year or once every other year at best.  This is why Texans rush to the store to stock up the minute they hear winter mix weather is heading their way.  Stores become hectic and almost comical with people grabbing supplies.  Texas weather is so unpredictable, there is no telling how long it will really last.  For example, Houston was to get freezing weather during the night and be OK during the morning hours and this did not happen and the DFW area was to get majorly impacted by ice and snow that did not happen. 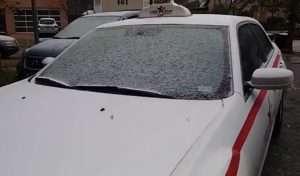 People would think that Texans would learn to keep basic items stocked up for emergencies such as this, but no there are many times that these items would go bad before they could all be used.  Some items can be stocked up on that have a long shelf life such as bottled water and canned food.  Texans are not used to cold weather and often panic because they do not have all the necessary tools to deal with ice, snow, sleet or cold temperatures.  If you are reading this where there are negative temperatures and you are thinking Texans are babies, think of it this way, you have a heat wave of 90 degrees and are caught off guard as to how to keep cool and are in a panic.  Remember this, Texans are now laughing at you.

Conclusion of all this would be that people who deal with cold, freezing temperatures and snow, ice and sleet need to share their wisdom with others.  How do you stock up on food, what do you get, how do you drive?  Texans preparing for cold, snow and ice is something that will never be solved in the south; we do not have maintenance of our roads for ice, snow and sleet like they do in the north.  What will I do today?  I will sit on my couch with my fleece PJ bottoms on, wrapped in a blanket, 2 pair of socks with 1 pair of soft booties as well, long sleeve shirt and hoodie on watching the breaking news coverage of Winter Storm in Texas!  Be safe everyone!

Estimated Reading Time: 2 Minutes This post was originally published on November 26, 2016The latest update to this post was made 5 years ago. Buc-ees – It’s A Texas Thing! Buc-ee’s is by far the best travel spot to gas [Read More…]

My Experience With Hurricane Harvey

Estimated Reading Time: 6 Minutes This post was originally published on September 4, 2017The latest update to this post was made 4 years ago. My Experience With Hurricane Harvey You are on page 1/3. =-= Warning: Some videos are graphic [Read More…]