This post was originally published on November 22, 2016
The latest update to this post was made 5 years ago. 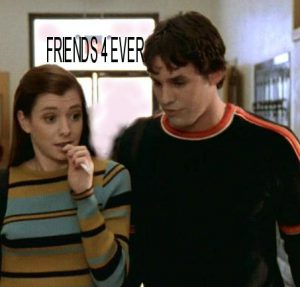 Buffy the Vampire Slayer is a series based on a strong female lead.  Buffy also has two best friends, Willow and Xander, that help her fight evil. Buffy’s friends were everything to her.  These two characters are developed through out the series. The viewer watches them grow from 15-year-old kids to adults.  They have up and downs in school, relationships and their daily lives.

Willow starts as your typical shy studious girl.  She does have a crush on Xander.  Joss played this crush into several episodes but then Willow and Xander decided to be friends. Willow and Xander did try to help Buffy.  Willow used her brain to help Buffy’s mentor, Giles, research the vampires, demons, or situation. She used a computer for this research.  Computers were just starting to be used by everyone at the time, so it was cutting edge at the time.

Xander played the typical awkward teenage boy.  He had a crush on Buffy and had to deal with a female being stronger.   This was a struggle for him through out the series.  Xander seemed to be a character that liked to be bossed around.  Willow did not like to be bossed around and often took the lead. Xander did not. Willow emerged into an independent character. She went through her issues of finding herself.  Xander did not do this until the end of the series. Better late than never, right?

Willow and Xander were handy for Buffy.  They did her easy grunt work and she fought the evil.  In the beginning of the series, there was a distinct separation of Buffy the hero and Xander and Willow the support. Later in the series, Willow and Xander played some lead roles of being the hero.  They saved Buffy a few times as well.  I think this was Joss’s way of saying that even the weak can be important and help.

If the series were to come back, I often wonder how it would look?  Buffy would probably be embraced by all her peers.  She wouldn’t need to hide the fact that she was the Slayer. Willow and Xander would not settle for being Buffy’s sidekicks.  They would want to be heroes too.  Everyone today has to be in the spotlight. Nobody wants to be the support of anyone. When the series started, it was a different time.  But, the series has young people of today that really enjoy it and are fans.  So interesting because they are from a different time.

Estimated Reading Time: 4 Minutes This post was originally published on November 14, 2021The latest update to this post was made 1 year ago. Friendsgiving Friendsgiving is something that has become very popular in the past few years. Many will [Read More…]