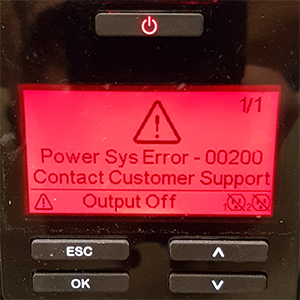 There aren’t too many times where network electronics can scare you, but this is one of them.  For the second time in the past couple of months, I have had a NEW APC UPS stop functioning properly.  UPS’s or Uninterruptible Power Supplies, are supposed to switch from commercially provided electricity to a power supply which runs on several expandable battery packs.

The first time I witnessed the ‘red LCD of destruction’, I figured it was a false alarm and just pressed the power button like a moron!  Seconds later, sparks and explosions were happening inside the unit. As the smoke cleared out and my heart continued racing, I went cautiously around the back of the unit and unplugged it from the wall.  I then disconnected each battery as a safety measure and took down a few notes referencing the serial numbers so I could get a replacement.

The next step was fairly easy.  I [chatted with the friendly help at APC] / Schneider Electric and gave them a break-down of what happened with the serial numbers and purchase dates.  They understood the issue and sent me a new head-unit with replacement batteries and two battery packs as well. My first experience was very similar to the following video:

The second time this happened, my experience went this way:

The model of UPS as seen in the second video is an APC Smart UPS SRT5KRMXLT.  I’ve had two malfunction so far, but many others have been working great.  I recommend them in a commercial environment to support heavy network electronics for a good hour or so after the power goes out.  Despite a few faulty items, [APC / Schneider Electric] stands by their equipment and is quick to give you great support.

Estimated Reading Time: < 1 Minute Cisco ISE 2.1 FQDN Bleeding edge technology can be frustrating to say the least.  I am creating this blog because I cannot find anything outside of Cisco’s website on ISE 2.1. I found an interesting [Read More…]